From a sports scientific point of view, a Sport-specific strength training program is fundamental to an athlete’s development and success. Long gone are the days when coaches shunned weight lifting for fear that it might hinder the performance of fine skill and correct technique. It’s now accepted that high levels of strength are a prerequisite to superior speed, power, strength endurance and overall sporting performance [www.sport-fitness-advisor.com (2014); National Strength and Conditioning Association (2008)]. From this point of view one of the best ways to train for acrobatics would be using a periodized training plan, and spending more than 2/3 of the time on specific conditioning like sports specific strength training [Demey and Wellington (2010); Eubanks and Gonzalez (2009)]. For increasing performance it is widely agreed in the field of sport science, that resistance training with compound exercises, done at exercise intensities between 60 – 80 % or even higher, if the athletes condition allow it, is a highly effective way to increase performance [Andersen and Aagaard (2010); Kraemer et al. (2002)]. For example, if you are doing weightlifting this means exercising with weights that are close to or above 80% of your one repetition max ((1 RM) the weight you can lift once and only once). There are many similarities between the movement patterns and metabolic demands of weightlifting and acrobatics, this makes weightlifting a great way to condition yourself for acrobatics, both in the sense of increasing performance and in terms of preventing injury by creating a proper balance of strength and neuromuscular activation.
However most of the athletes practicing partner acrobatics and acroyoga are not competing athletes, and are not training using a periodized training plan. As the European federation of professional circus schools (FEDEC) writes in their manual ”Theory, guidance & good practice for training”, by Demey and Wellington

In acrobatics and circus training there is a huge variety of approaches that trainers and students can take to prepare themselves physically. Frequently an ad hoc approach is taken when implementing physical conditioning, which is often unplanned and with no sound justification. Physical preparation should not rely so heavily on guesswork and luck (Demey and Wellington, 2010, p. 8).

What can we do in our practice to use some of the principles of proper training planning in our favor, when we don’t train for competitions and just want to learn the handstand and play?

One of the main principles of periodization is variation in the training stimulus. In order for adaptations to occur, the training load or stress needs to be suffi- cient. The neuromuscular system will adapt to these stressors, so the training stimulus must constantly be varied in order to create further adaptations [Demey and Wellington (2010); McArdle et al. (2010)]. The principle of specificity states that training should mirror the demands of the sport as closely as possible [Kraemer et al. (2002)]. This applies not only to way the body’s energy systems and neuromuscular system is taxed (through ma- nipulation of intensity and rest intervals etc) but also to the movement patterns of each exercise [McArdle et al. (2010); National Strength and Conditioning Association (2008)]. Several studies have shown that strength and balance training promotes adaptations of the nerveous system, in the form of a decrease in the stretch reflex excitability [Stein and Capaday (1988); Trimble and Koceja (1994); Gruber et al. (2007)]. The importance of this from an acrobatic training perspective, is that with similar adaptations of the nervous system from strength and balance oriented training, like acrobatics, we can achieve skills faster and increase our performance through strength training. Furthermore this adaptation is considered to promote stability around a joint by increasing the capacity for co- contracting the muscles [Gruber et al. (2007)]. However the stability achieved by co-contraction of opposing muscles are highly dependent upon a proper bal- ance of strength and neuromuscular activation. Specific strength training have been shown to be an effective tool to promote balance in neuromuscular activation, strength ratios of opposing muscles and in increasing overall performance. The recommendation based on this is thus that for acrobatic training, doing resistance training with this focus is indeed a sensible approach to conditioning and general preparation for doing acrobatics.

Acrobatic practice has many benefits, and it may seem to be a very diverse form of movement, but if you look at the individual joint movements like flexion and extension of the hips and shoulders, or pushing and pulling movements of the arms and legs. It can actually be broken down into a few specific movement patterns, not only in practicing the handstand but in both basing og flying there is a lot of pushing through the shoulder movements and only very few pulling movements. This seem to create a pattern of similar shoulder impingement issues as those seen in overhead athletes like volleyball players, and indeed there is a prevalence of shoulder injuries in acrobatic sports [Purnell et al. (2010)].  Another specialized pattern of movement done repeatedly in acrobatics is the closing of the hip joint, especially in L-basing, this shortening pattern of the hip flexors are being reinforced repeatedly during practice. The point being that as any sport if you practice regularly, even diverse forms of movement like acrobatics, becomes a highly specialized form of training with some movement patterns being done repeatedly. With specialization comes certain pitfalls, and doing the same movements repeatedly will strengthen only certain muscles and movement patterns, over time this can lead to patterns where certain muscles becomes too active and/or tight, thus overpowering others, and mis-advantageous compensations may arise.

In athletic training one of the tools used to avoid this negative effect of specialization, and improve the performance of the athlete is Periodization which is the systematic cycling and variation of the training stimulus [Garrett and Kirkendall (2000)], It involves progressive cycling of various aspects of a training program during a specific period. Periodization divides the year round condition program into phases of training which focus on different goals. A good example of a periodized training plan for acrobatic gymnastics can be found in [Eubanks and Gonzalez (2009)]. 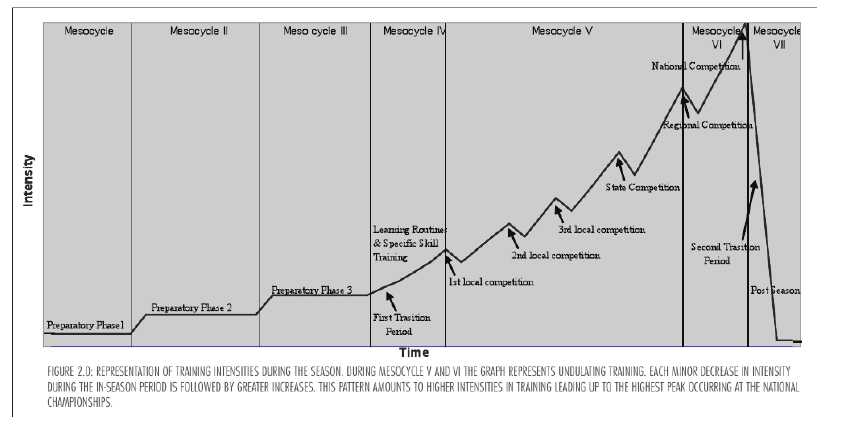 Usually the year is divided into three phases: preparation, competitive, and transition. The aim is to reach the best possible performance in the most important competition of the year [Eubanks and Gonzalez (2009)].

A significant challenge is how to design a training program  that facilitates muscular and neurological adaptations whilst respecting the healing rate of the body’s tissues and maintaining safety of the individual. It must be remembered that there are many different elements that contribute to successful performance, not just the physical conditioning program [Demey and Wellington (2010)], Proper sleep and nutrition are also fundamental to successful performance and recovery [McArdle et al. (2010)]. Now we may not be competing athletes but we can still benefit from applying the principles of periodization in our approach to conditioning. It involves pro-gressive cycling of various aspects of a training program during a specific period. We know that there is no one ”cure all” exercise and using periodization enables us to choose from many different exercises and progressions, implementing them at different times in our training. Planning your training will help avoid injury and increase your performance.

Variation and Balance in training.

So how do we use these principles when we don’t plan our training? For example, Let’s say you really want to be able to do a handstand, so you practice for 4 hours a day doing handstands, and after a while your shoulders hurt. Maybe you should think of varying your training stimulus! Doing handstands is like repeatedly pressing your body weight overhead in the gym, if you only press, the muscles that do the pulling get compromised. So instead of repeatedly doing handstands 4 hours a day, vary your training. You could maybe spend one hour or more, climbing or doing pulling movements in the gym. This will not only help to keep you injury free, but there is also significant neuroscientific evidence to back that a more varied approach in practice will actually make you learn faster and retain more of what you learn [Zetou et al. (2014); Breslin et al. (2012); Magill and Hall (1990); Proteau et al. (1994)].